Many Sarajevans know that stadion Grbavica is where there heart wants to burst out of their chest, the place where they’ve cried and laughed oh so many times. Stadion Grbavica is the home to Sarajevo’s football club Željezničar. The stadion compared to other stadions is not huge at all because it holds almost 14,000 people. But the people of Sarajevo, that love Željezničar know that is more than a stadion, they know that it is a way of life for many.

While I was in Sarajevo, I heard stories from many people about how living for your team is something you just can’t describe, talking about how they’d miss a holiday but never a game. Unfortunately, the stadion underwent serious damage during the war that occured in Bosnia.

The stadion was locared between the first front lines and endured heavy fighting. It would not be until ’96 that another game would be played on this beautiful stadion.

While I was in Sarajevo, they were talking about adding an Eastern stand to the stadion, as we all might know Sarajevo’s budget would not have enough to finance this Eastern stand. The club supporters and local busineeses surprised the football team, because there were not enough funds to rebuild this stadion they all decided to pitch in and help rebuild the stadion. That is exactly what happened, the eastern stand was added. 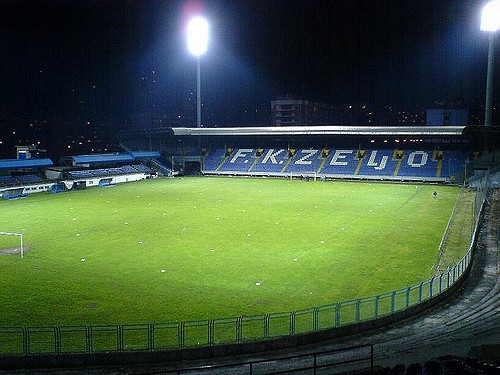 How amazing I though to myself, the Bosnians made it happen. Way to go Sarajevo and way to go Zeljo!!