Among hundreds of mosques in Sarajevo, the most famous one is Gazi Husrev-bey mosque. I wouldn’t dare to say thr mkst beautiful one because ball if them are beautiful in their own way. Gazi Husrev-bey’s mosque os located in the Baščaršija neighborhood in the Old Town. Even though I didn’t say it is the most beautiful one, it is the largest historical mosque in Bosnia and Herzegovina and as well one of the most representative Ottoman structure in the Balkans. By its architectural style, the Gazi Husrev-bey mosque represents Early Period of the Classical Ottoman Architecture.

This mosque suffered significant amount of deconstruction during the Siege of Sarajevo. As we know, Serbian forces targeted many centers of the city’s culture such as mosques, museums and libraries thus the mosque was the largest, it was an obvious target. The reconstruction of the Gazi Husrev-bey’s mosque started with a foreign help right after the war, in 1996. In Friday, I enjoy seeing so many people around and inside the mosque. It tells a great story to all the tourists passing by saying that even though they tried to kill it, this city still has religious soul. 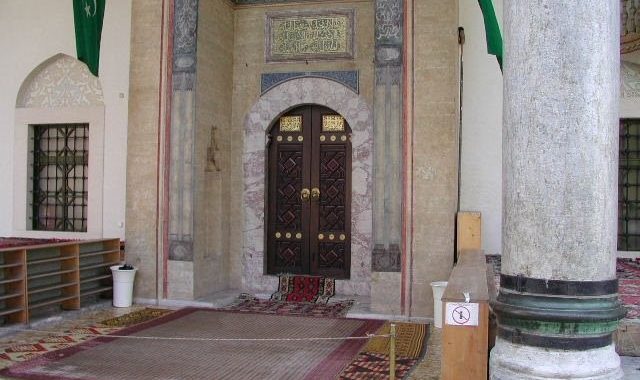 The most beautiful and unique thing is that there is a synagogue right next to it and an Orthodox Cathedral not very far away from it which shows that we like each other no matter which skin color or religion we are. I often ask myself what if one day destiny takes me tk another country. I think then I wouldn’t be able to hear a call to a prayer. To me the most beautiful and unique thing in Sarajevo is being able to hear both the church bells and Muslim call to a prayer at the same time. That can only happen here, in my city. Ensemble of the Gazi Husrev-Bey’s Mosque includes a fountain (public fountain), mekteb (religious school), abdesthana with warm water (a ceremonial washing), tomb (mausoleum) of Gazi Husrev-Bey and Murat Bey Tardic, harem (graveyard), muvekithana (determining the exact time for prayer), minaret and a clock tower. The mosque is surrounded on all sides by narrow streets of the old bazaar, with tens and hundreds of stores, so it is impossible to examine in its beauty and size from the sides.

However, when when you enter in its spacious garden, it is all changed. In front of the eyes this is an imposing building, full of peace, harmonious beauty and size. This is not only the largest mosque which is built at all in our country, but also a masterpiece of Ottoman architecture of the time. The builder of this mosque is Mimar (chief architect) of the Ottoman Empire, Adžem Asir Ali, the Persian from Tabriz who was captured in the Turkish-Persian War, and later, until his death (in 1538) served as chief architect in Istanbul. With Mimar Hajrudin, Sr., he was one of the leading makers of so-called early Istanbul school of architecture and this mosque is one of the most valuable achievements of this school outside of Constantinople.