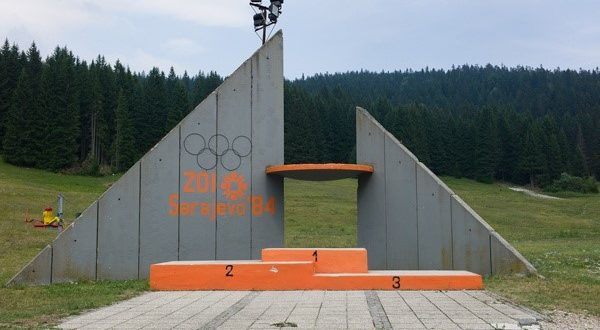 Sarajevo has gone through a lot. From the Austro Hungarian times to the Ottoman and leading all the way into the Siege in the 1990’s. But before the Siege and the war in Bosnia, Sarajevo was known for something else.

Sarajevo was known for the 1984 winter Olympics that the city held. Yeah, you got that right Sarajevo. There’s even a story behind the Winter Olympics, Sarajevo a few days before the Olympics had no snow. They were working on getting artificial snow when little did you know a blizzard hits Sarajevo and boom Sarajevo has a lot of snow.

Now you have some abandoned sites and some slopes still being used in and around Sarajevo. I had seen the abandoned Bob sleigh track and now I wanted to see something less touristy. The locals told me to visit the Igman Olympic Jumps. These jumps are located on the Igman Mountain, just outside of Sarajevo. It was the site of cross country skiing during the 1984 winter Olympics.

Unfortunately, the site of the Igman Jumps was used during the Siege and during the conflict in Sarajevo. It became a buffer zone to the United Nations and the Army of Republika Srpska. So aside from seeing the Olympic site you can still see scars from the war as well.

It’s crazy how a place that was once used for the Olympic Games was later on used during the war as well. It seems like I will just enjoy the rest of my day just gazing off on the Igman Mountain.