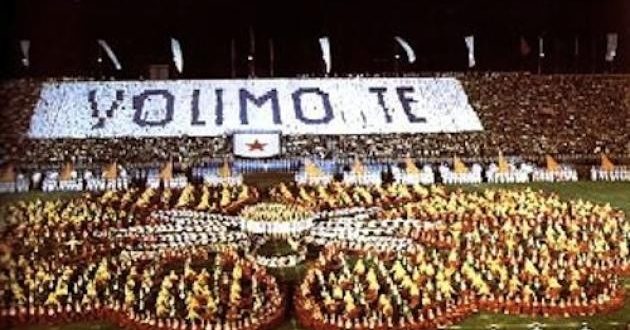 In former Yugoslavia, 25th May is considered as a Day of Youth and the Day of birth of President, Josip Broz Tito, even though he was on born on 7th of May.

In 1947, the idea of relay of youth was given by President Tito, and next year it was pronounced as the day of youth.
Relay of Youth is a stick that went through all Yugoslavia and on 25th of May was given to the President by the best pioneer.

In Slovenia, in 1987 a scandal happened when poster about that event was in the streets that reminded of posters of German National socialists, and was shut immediately.

Few years after in most of the countries, that day wasn’t celebrated anymore, and it hasn’t got the same meaning now.
The last year of celebration of that day was 7 years after Presidents death.
Name of the celebration was “Broad-minded pioneer.” That was the day when the last stick was given, by pioneer named Rajmond Bročaj. That last stick had 8 drops of blood on it.
But every year, thousands of people go on President’s grave, to get the stick from all countries and put it on his grave.

Now, whoever you ask about former Yugoslavia, they all say the same:
“That life had a meaning. We all lived safe, had jobs, had so many cultural events, concerts, associations, better social security, buildings were built. We were going forward. Now, no one has that.”

President Tito passed away on May 4th.
On his funeral, 700 000 people came to pay respect, including 4 king, 5 prince, 6 Presidents of Parliament, 31 State Presidents, 22 prime Ministers, 47 Ministers.
Whole Yugoslavia paid their respect with a minute of silence, and a lot of people cried.

You know that the President was good when the whole world is in sadness.