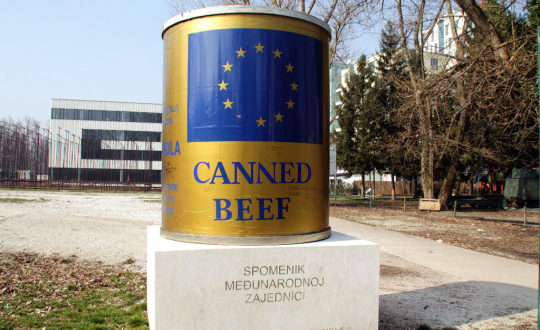 As many of you may know Sarajevo was under the siege for more than three years, the longest that a capital city was ever under siege for. During those hard days, the Bosnians were waiting for the International community to help, waiting for some support or what not. Well because they should, it’s their responsibilty as human beings to do so.

One of the most unique things of seen in any town is definitely the ‘Canned Beef’ monument in Sarajevo. Since, I had been walking through Sarajevo for a few days already, I had seen many things, I had seen scars from the previous war, I saw traces of the Ottoman and Austro-Hungarian empires, but I did not know what this canned beef monument was here for. When I asked a pedestrian that was randomly walking by they answered oh c’mon that’s probably the most ironic thing you will see.

Once again I was confused, I asked my tour guide please explain to us what is this canned beef monument doing in Bosnia? I did have to admit seeing the European Union circle around it was a bit weird but I awaited the answers.

We found out that during the siege of Sarajevo, Bosnia had an embargo and could not recieve any international humantarian aid. The ICAR canned beef soon became a symbol of what the international community gave to Sarajevo during these years.

After the siege was over and the war stopped, the oh so grateful citizens of Sarajevo decided to thank the internation community by getting this ICAR canned beef monument made, staying tall at about a meter tall.

Wow, I thought to myselves, these Bosnians are something else.